(Original post, from April 3, 10:51 a.m.) Sometimes brothers face off against each other in the world of sports. Hey, Peyton and Eli Manning are brothers! Hey, the Harbaughs are coaching against each other in the Super Bowl! Steph Curry's brother is in the NBA! Um, a Molina gave another Molina crackers on the field one time! But what's about to happen in the college basketball national championship game is a story more unique, nuanced, and quite frankly, more amazing than those sibling matchups.

UNC's Nate Britt and Villanova's Kris Jenkins are not brothers by blood. Rather, the Britts legally adopted Jenkins in 2007 when Jenkins' mother decided they would give her young son a better life. Britt and Jenkins played on the same youth teams and went to the same high school, so this is really their first competitive matchup since they became siblings. Jenkins called the opportunity to play against Britt in the championship game "something our families could cherish forever."

We never really talked about going to the same college. We talked about how crazy it would be if we were to play each other. For it to get this far is something. Words couldn't do it justice.

The story begins when Jenkins was a youngster. His mother, Felicia, was a college basketball player and later a coach, and taught her son the game from a young age. The Jenkins met the Britts through basketball, as Nate's father coached an AAU team called DC Assault.

In a relatively short span of time, things got complicated. Felicia and Jenkins' father separated and she took Kris to Baltimore, and Kris played for the Britts' AAU team. While there, Kris' baby sister, Kori, got sick. While Felicia was in the hospital with Kori, Jenkins essentially lived with the Britts. Kori died at 11 months. Felicia took a job as head coach of Division II Benedict College in South Carolina, but wanted to let Kris continue playing AAU ball in Maryland, often staying for extended periods of time with the Britts.

For a variety of reasons — the moving, the turmoil, and a sudden dip in Kris' grades and off-court behavior — Felicia became worried for her son. As a former military police officer, she liked the way Nate's dad, an ex-cop, brought discipline to Kris' life and game. So she asked the Britts to take Kris full-time.

"Understand it was the most difficult decision I made in my life," Felicia Jenkins said. "But I knew I had to make it in order to make sure he had the best opportunity."

The Britts were taken aback:

"I said as a mother, could you imagine going to someone else and saying you want them to take care of your son?" Britt Sr. told his wife. "So how do we say no?"

Nate treated Kris as a brother instantly, and things worked out for the best.

"It was tough at first, but the Britts, they accepted me," said Jenkins, who still keeps in touch with Kelvin and Felicia, who is now an assistant . "The whole family just made me feel so welcome, and they accepted me for who I was and elevated me as a person and made me better. It's something that I'm always thankful for. I thank God for it every day."

The two went onto great careers — Britt won Gatorade Player of the year in DC when they were sophomores, Jenkins won it when they were juniors and seniors — and committed to separate schools. They were so competitive that when UNC and Villanova played in a first-round tournament game in 2013, the two sat in a room and didn't talk to each other.

"They were going back and forth," Nate Britt Sr. said. "They weren't talking. They were texting each other in the same room. It was unbelievable."

The Britts spent last weekend driving the 700 miles between the East regional in Philly (where Nate was playing) and Louisville (where Kris was playing) in hopes they could see both teams clinch trips to Houston for the Final Four.

When Villanova won its Elite Eight game Saturday night, Kris scrambled to Philly so he could watch his brother try and clinch his own Final Four trip.

Although Jenkins now considers the Britts family, he is still close with his birth parents. The Britts and Felicia are all in Houston to watch their sons — birth and adopted — play.

Nobody had to do any of this.

Felicia Jenkins didn't have to volunteer to give up her son. She defied every maternal instinct to be by her child in his formative years because she sensed allowing the Britts to raise him would turn out for the best. Her wisdom has paid off.

The Britts didn't have to take in a kid they knew from basketball as a family member. They already had several children of their own, and, man, kids are a handful, financially and emotionally. But they acted on faith, and it seems as if Jenkins' presence in their household has enriched everybody's lives.

Nate Britt and Kris Jenkins didn't have to accept each other. Nate could've resented the random newcomer suddenly treated as an equal in his own home. Kris could've soured on a young life filled with instability. Instead, they've both gained brothers.

Everybody in this scenario behaved in a way that required generosity, love, openness, and extraordinary care for the welfare of other humans, even at one's own expense. It's touching to see it pay off so satisfactorily. Whether UNC or Villanova wins Monday night, the Britts and Jenkins are the true winners.

Kerr consults assistant on name of ref before yelling at him @scottostler @ThompsonScribe @diamond83 @darrenrovell pic.twitter.com/ZqDZpUYuWg 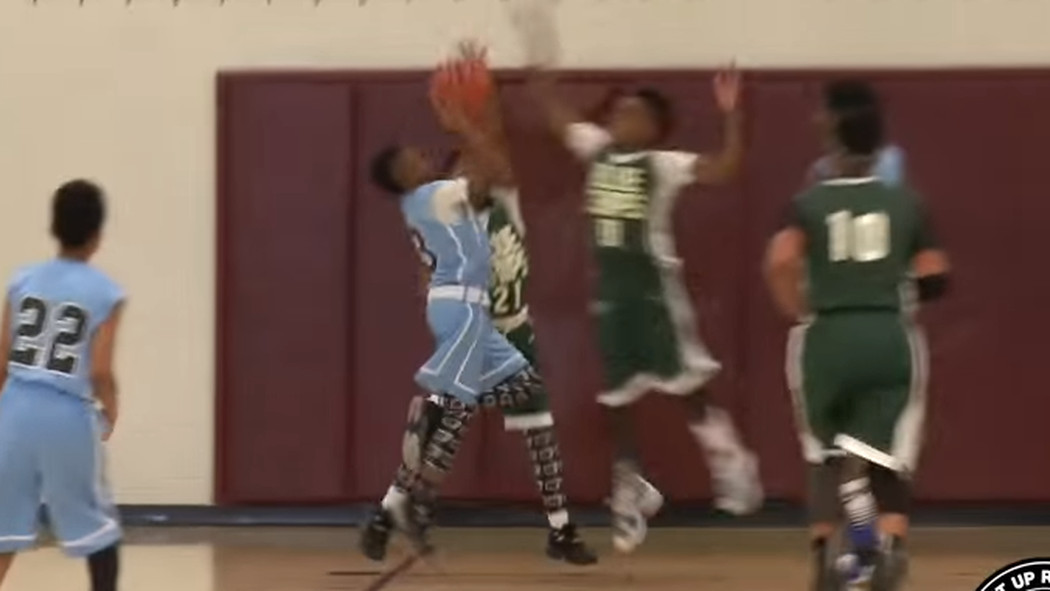 LeBron James Jr. BALLED OUT with his dad in attendance 💯https://t.co/dFNSlD562D