Choosing someone to fill the role of point guard in Phil's all-time triangle offense was no easy feat.

Gary Payton was probably the "best" of the bunch, but he only played one season for Jackson—2003-04, when the star-studded Lakers fell flat in the NBA Finals against the Detroit Pistons. B.J. Armstrong was the best three-point shooter of the bunch (.437) and averaged 10.9 points per game for Phil, but was only a full-time starter for three of his six seasons in Chicago. Ron Harper, a five-time champion who might've been the best defender of the bunch, was never quite the marksman that the Zen Master typically demanded of his floor generals.

The nod, then, goes to Derek Fisher. He played nine seasons for Phil—tied with Scottie Pippen for the second-most of any Jackson disciple—winning five championships in seven trips to the Finals. Fisher was hardly the most gifted point guard to suit up for Jackson, but what he lacked in talent, he more than made up for in tenacity, toughness, intelligence and sheer will to win.

Also, the guy could shoot, which is Item 1 on the agenda of any point guard operating within the triangle. 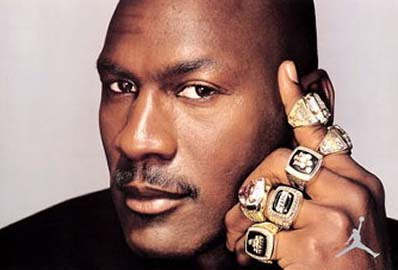 There's no need to apologize to Kobe Bryant here—even the Black Mamba might admit that Michael Jordan deserves the starting nod on this squad ahead of him. After all, it's M.J.'s game after which Bryant has so diligently patterned his over the last 17 years.

I don't need to try too hard to make the case for His Airness (i.e arguablythe greatest basketball player of all time) as the Zen Master's starting shooting guard, so a quick rundown of Jordan's accomplishments while with Phil should suffice:

– seven trips to the All-Star Game

I'll admit, I was tempted to fit Kobe in as Phil's go-to small forward, but Bryant played predominantly at the off-guard spot, with only the occasional slide over to the bigger wing position.

And, really, trying to squeeze the Mamba into a role that he rarely (if ever) manned for the Zen Master would be disrespectful to Scottie Pippen.

Pippen was, in many ways, the perfect player for the triangle. That is, he was a versatile wing—one who could run the offense with the ball in his hands, drive the lane, post up with aplomb and pop out for a perimeter jumper from time to time. Moreover, he was one of the greatest defenders of all time, with the ability to lock down players at multiple positions—a distinction for which we now so often laud LeBron James.

Pippen was much more than just M.J.'s second fiddle, too. He starred as Chicago's leading man while Jordan was messing around in baseball's minor leagues, even going so far as to pull the Bulls within a game of the Eastern Conference Finals in 1994.

Sure, you can fault Pippen's fiery dispute with Phil for the Bulls' shortfall that year, but to do so would largely ignore how instrumental he was in bringing Chicago to the brink in the first place. 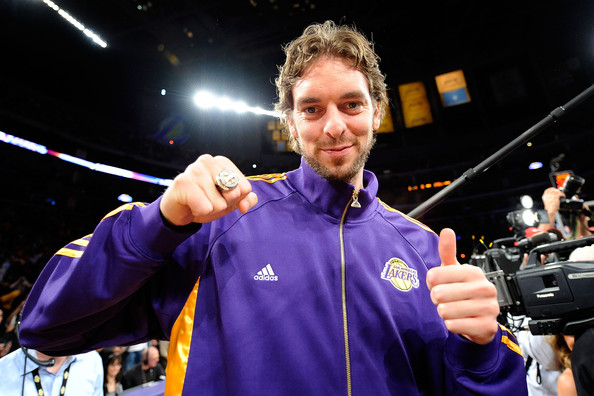 The only controversy to be found in selecting a power forward for the All-Phil team rests with how to weigh championships against other markers of excellence. Horace Grant won four titles (three with the Bulls, one with the Lakers) to Pau Gasol's two while taking instructions from the Zen Master.

What tipped the scales in Gasol's favor was his role on his two championship squads and his individual excellence. While Grant was the third banana on those Bulls teams from the early '90s and a hard-nosed role player on L.A.'s title-winner in 2001, Gasol was the clear second option on each of the Lakers' most recent championships, behind only Kobe Bryant. Never was Grant mistaken for the most skilled big man in basketball, whereas Gasol has worn that crown comfortably on several occasions during his highly decorated career.

Furthermore, as productive as Grant was for much of his time as a pro, few (if any) would argue that he deserves to be enshrined in the Hall of Fame. The same can't be said of Gasol, whose three All-Star Games and three All-NBA selections (Third Team twice, and Second Team) under Phil are among the many highlights on a career resume that should land the sinewy Spaniard a spot in Springfield once he's retired.

Of all the big men with whom Phil Jackson worked over the years, none could so much as hold a candle to Shaquille O'Neal. The Big Diesel was the first (and the only) pivot with the talent to carry a team as its first option to play for Phil Jackson.

It was with Phil that Shaq logged perhaps the finest season any player has put together since Michael Jordan's last ride with the Bulls. In 1999-2000, O'Neal averaged 29.7 points, 13.6 rebounds, 3.8 assists and 3.0 blocks while leading the Lakers to a 67-15 regular-season record and the first of their three championships to tip off the new millennium. For his efforts, O'Neal was named the league's MVP—in a landslide, no less.

Shaq never quite recaptured that same semblance of dominance thereafter, though the rest of his time with the Zen Master was plenty productive. By the time his ride with Phil came to a close in 2004, O'Neal had racked up three championships in four trips to the Finals, three Finals MVPs, two All-Star Game MVPs, five All-Star appearances, five All-NBA First Team selections and three All-Defensive Second Team nods.

Still, we're left to wonder what might've been had Shaq taken better care of his body…

…and if he and Kobe Bryant had gotten along better as teammates.

As unfortunate as the demise of the Kobe-Shaq tandem was for Phil, the Lakers and basketball lore on the whole, the on-again, off-again relationship between Bryant and Jackson was just as strange, if not more so.

The two butted heads during their first five years together before Jackson left the Lakers. Shortly thereafter, Phil slammed Bryant as "uncoachable" in his book, The Last Season: A Team in Search of Its Soul, which detailed L.A.'s tumultuous 2003-04 campaign.

Things remained rocky between Kobe and Phil for a time, even after Jackson returned to the Lakers in an official capacity in 2005. Eventually, the two struck up a much stronger rapport, one fashioned on a foundation of mutual admiration, as the Lakers climbed back to the top of the NBA between 2008 and 2010.

Player and coach have remained in touch since Jackson stepped away "for good" in 2011. Phil maintains he would choose M.J. over Kobe, though the fact that Bryant has done enough to warrant a worthwhile comparison at all speaks volumes of his accomplishments and acumen as a basketball player for the Zen Master. 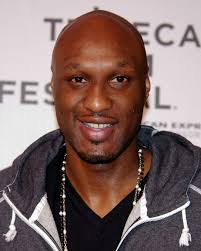 Of all the successes that Phil Jackson enjoyed in shaping his players, few can compare to that which he had with Lamar Odom (at least as far as the Zen Master's influence is concerned).

It was Jackson who, prior to the 2008-09 season, decided to move Odom, a starter for his entire basketball life, into a primary role off the Lakers bench. The shift wasn't without its hitches, though Odom eventually blossomed into the NBA's Sixth Man of the Year in 2011 as a result.

Granted, even that accomplishment left Odom far from the second coming of Scottie to Kobe's M.J. for which he'd initially been pegged. Nonetheless,Odom's ability to morph from second-unit leader to crunch-time glue guy made him an integral part of two of Jackson's NBA champions.

Phil entered into his decision about Odom's future with at least one previous case to offer as proof that he knew how to handle multi-talented bigs.

Toni Kukoc didn't start consistently for the Jordan-era Bulls until 1997-98—more than four years after he finally arrived stateside—but managed to carve out a steady role for himself during the Zen Master's second three-peat. In fact, the Croatian Sensation enjoyed one of his finest seasons as a pro in 1995-96, when he averaged 13.3 points and shot better than 40 percent from three, despite coming off the bench 61 times in 81 games played.

Like Odom, Kukoc never quite lived up to his lofty billing as another Magic Johnson. Nonetheless, three championships in five years under the greatest coach in NBA history isn't too shabby of a legacy for Kukoc to leave behind.

Each of Phil Jackson's three-peats in Chicago featured a "Big 3" of its own, with Michael Jordan and Scottie Pippen as Options 1 and 2, respectively. In the early '90s, the duties of Option 3 fell to Horace Grant.

The 6'10" power forward out of Clemson was the only player other than MJ and Scottie to average double digits as a scorer in Chicago between 1990 and 1993. Grant also led the team in rebounding during that run of championships.

Like so many other members of the Bulls, Grant registered a banner year in 1993-94 while Jordan was away, averaging 15.1 points, 11 rebounds, 3.4 assists and 2.3 combined blocks and steals in what turned out to be his first and only season as an All-Star.

Grant rekindled two previously successful relationships—that with the Zen Master in the Windy City and his Orlando Magic partnership with Shaq—upon joining the Lakers in 2000. The bespectacled big man earned his fourth championship while with the Purple and Gold that year and was on hand for the collapse that ended the Kobe-Shaq era before he retired in 2004.

For Phil's second three-peat in Chicago, the Bulls filled their quotient for rebounding, toughness and frontcourt defense with none other than Dennis Rodman.

Once an arch-nemesis of the Bulls during his days with the back-to-back champion Detroit Pistons, Rodman slid perfectly into the spot that Horace Grant had occupied in Phil Jackson's lineup during the first half of the '90s. "The Worm" led the league in rebounding during each of his three season in Chicago, thereby extending a carom-collecting streak he'd begun as a member of the San Antonio Spurs to seven years.

Rodman was easily the most colorful member of those brilliant Bulls teams. Then again, the same could be said of Dennis the Menace in pretty much any context into which he's been placed over the course of a life marked by trial, tragedy and triumph.

Fittingly enough, Rodman chose Jackson as his presenter during the former's induction into the Basketball Hall of Fame in 2011. 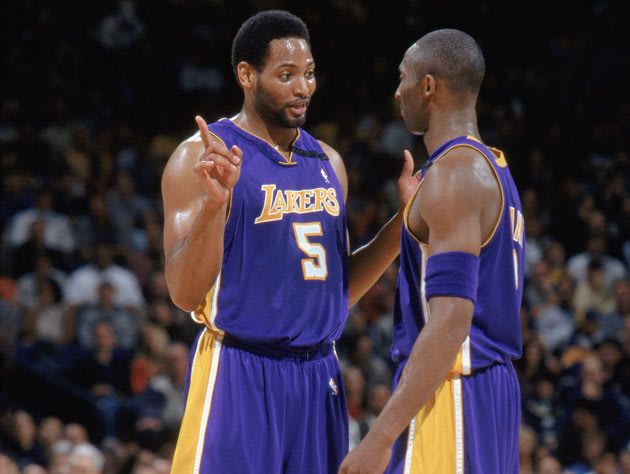 No team comprised of Phil Jackson's finest would be complete without at least one clutch shooter from each of his stops.

For Jackson's Laker days, that honor clearly belongs to Robert Horry. His history of coming up big in crunch time dates back to his championship years with the Houston Rockets in the mid-'90s. Horry, though, didn't truly cement his legacy as "Big Shot Bob" until he three-peated with Phil's Lakers in the early 2000s.

But don't let Horry's modest numbers fool you. If not for Rob's ability to tickle the twine from the three-point line (particularly under duress), Jackson's tenure in L.A. probably wouldn't have been as bountiful as it turned out to be.

Picking just one such marksman from Jackson's tenure with the Bulls is no easy feat. Like Horace Grant and Dennis Rodman up front, John Paxson and Steve Kerr both served dutifully in the role of "designated shooter"—and came up with historic highlights as a result—during each of Chicago's three-peats.

But only one of the two can claim to be the most accurate three-point shooter in NBA history. Kerr's career regular-season mark of 45.4 percent still stands as the best the league has yet seen, though Stephen Curry (44.6 percent) is gaining on him.

Even so, Curry would do well to add at least one series- (or championship-)clinching shot to his resume before he can rightfully compete with Kerr for any lofty shooting titles.