Tom Ziller has already written about why it'd be foolish to blame Kevin Durant for the Oklahoma City Thunder's 3-1 deficit in the second round of the NBA Playoffs. Without Russell Westbrook, Durant has effectively shouldered a massive load with a supporting cast that hasn't come through. That the Thunder are even in this series — all four games have gone down to the wire — is a testament to Durant.

Now, it is true that Durant shot 2-14 down the stretch Monday as the Grizzlies came away with an overtime win. Most people are smart enough to cut Durant some slack for that poor shooting, but some people will likely look at the box score and conclude that Durant came up short when his team needed him most.

But that's a remarkably simplistic and tone-deaf way of seeing things. The reality is that Durant was dogged by multiple defenders on most of these attempts. Without Westbrook in the game, the Grizzlies overloaded their defense to the point where it was physically impossible for anyone to get open. Oklahoma City played into Memphis' hands with horrendous spacing, and Durant bore the brunt of these shortcomings by having to fling heavily-contested looks that nobody would have made consistently.

Just look at these shot attempts:

How many of those are high-percentage looks? How many of them are plays where Durant reasonably could have gotten a better one? This is a team game. Durant can't just go one-on-five and barrel through any defense with the way the rules permit zone defenses and other elaborate five-man coverages, much less against a team as elite defensively as the Grizzlies.

When Durant caught the ball, he consistently saw coverages like the one you see here. 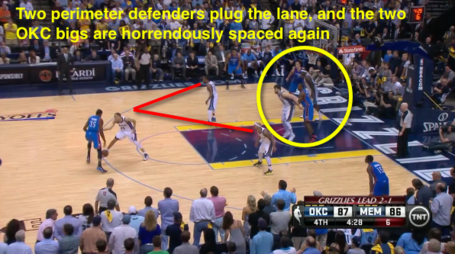 Five Grizzlies players are watching him. The two men guarding perimeter players stand with one foot in the paint, ready to plug the lane on any drive. The two big men, aided by Scott Brooks' ongoing curious decisions to play two big men together (Serge Ibaka and either Nick Collison or Kendrick Perkins), wait at the rim. None of the other four Thunder players are legitimate threats to do anything. Reggie Jackson and Thabo Sefolosha need Durant to easily beat Tayshaun Prince, his primary defender, with a one-step move to even be available for a kickout pass and a three. Ibaka and Collison are complete non-factors underneath the rim.

The five-man zone slows Durant's drive. With Jerryd Bayless and Mike Conley spaced perfectly to plug the middle and recover to their corner shooters, this is the best Durant can do. 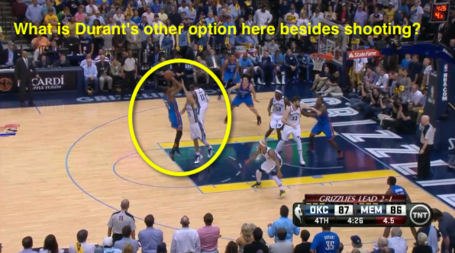 That Durant even got that deep is a minor miracle, but he misses over the outstretched arm of Prince.

Of course, this only covers what happens after Durant touches the ball. Even getting Durant open proved to be impossible, as Memphis sent two and even three defenders Durant's way as he curled off screens. Consider Darrell Arthur's positioning on this screen from Derek Fisher. 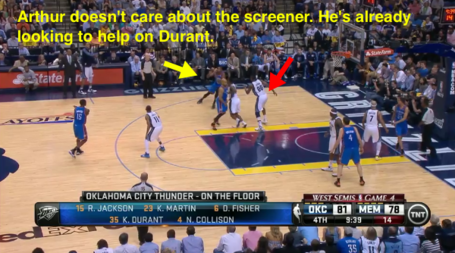 Arthur is "guarding" Fisher in a weird Thunder small lineup, but he doesn't bother to pay attention to him. Instead, he's already helping on Durant, combining with primary defender Tony Allen to box him in along the left baseline. Meanwhile, look how poorly the rest of the floor is spaced. 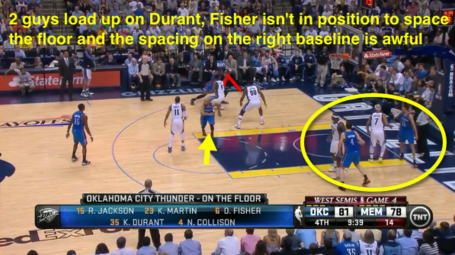 You have Collison and Kevin Martin right next to each other on the right baseline and Fisher stuck in the middle of the floor instead of spotting up along the perimeter. This allows Memphis to easily guard four Thunder players with three defenders and limits Durant's options. All he can do is shoot over two defenders. 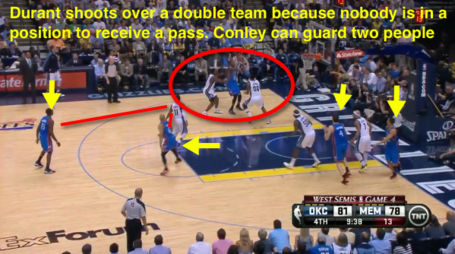 This pretty much kills any argument that Durant should have passed. Where, exactly, should Durant have gone with the ball? Jackson isn't coming to get it, and Fisher is right in the passing lane Conley occupies. On the opposite side, Collison and Martin are nullified. What else is Durant supposed to do besides shoot?

Other Grizzlies bigs overplayed Durant even more coming off screens. Look at Zach Randolph's positioning on that critical fourth-quarter play that ended in a Z-Bo block. 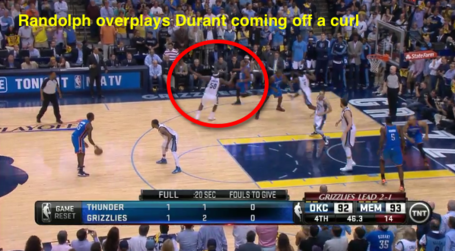 That prevents the Thunder from getting the ball to Durant on the move. Durant is eventually forced to go wider, but even when he finally catches it, the Grizzlies swarm. Conley will gladly help off Jackson to trap Durant here. 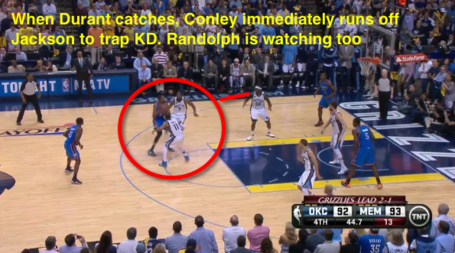 Note again how Jackson hasn't shifted right to give Durant a passing lane. With Jackson a non-threat, Durant has no choice but to go rogue. This is how it ends. 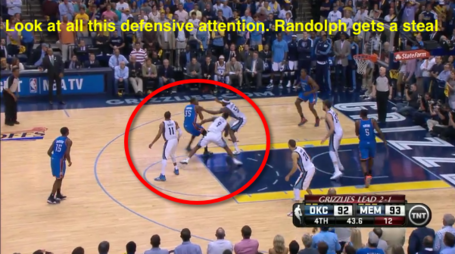 You saw a similar phenomenon earlier in the fourth quarter. Durant is going to try fading to the baseline, but Randolph snuffed out the initial play. 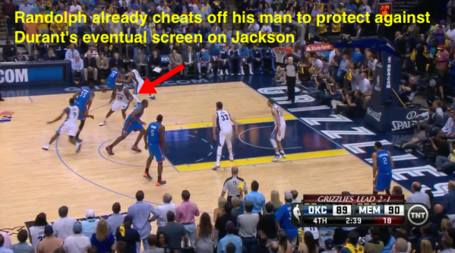 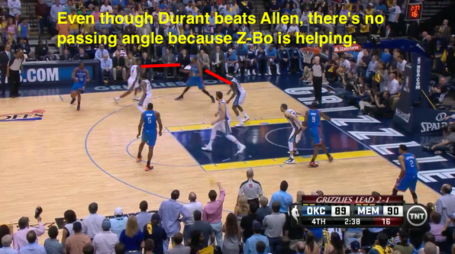 OKC now must go to Plan B: Durant curling off a Perkins screen. Because it's Perkins, though, the Grizzlies trap Durant using Marc Gasol. 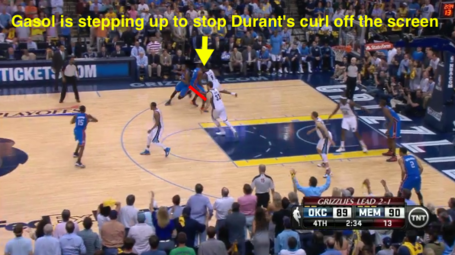 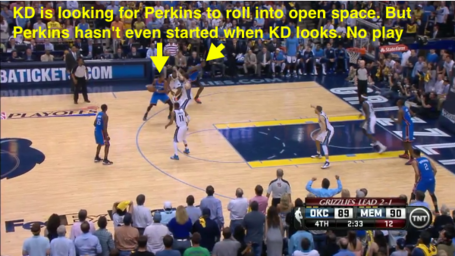 This is where Durant is handcuffed by his teammates. He's looking to make the right play here, taking the attention of the trap to hit Perkins rolling off his screen into the open space. Except … Perkins isn't rolling, because he's Kendrick Perkins and has little offensive awareness. A halfway decent player takes Durant's pocket bounce pass and creates something good out of it. Perkins stands there and does nothing.

That forces Durant to, once again, go at it alone. While he beats Allen… 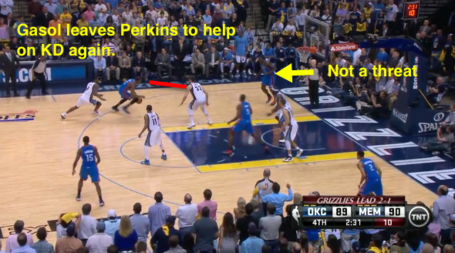 … he runs into Gasol, who again cares little about his man, Perkins. This is the shot that results. 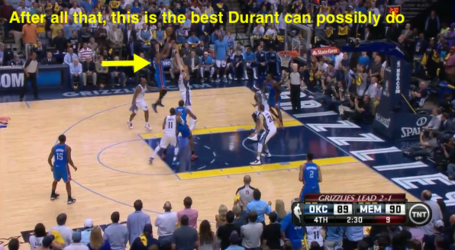 Finally, here's a play that sums all of these problems up. It starts when Randolph again overplays a curl — this time a double staggered screen — to prevent Durant from catching in his preferred spot. 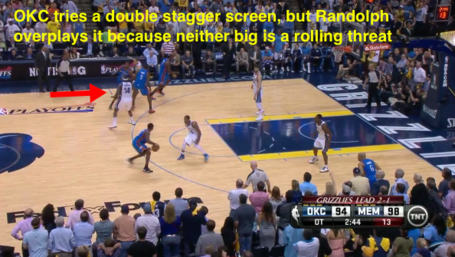 Because of that, Durant catches the ball at the top of the key and must stare into the beast that is Memphis' 1-4 flat defense. 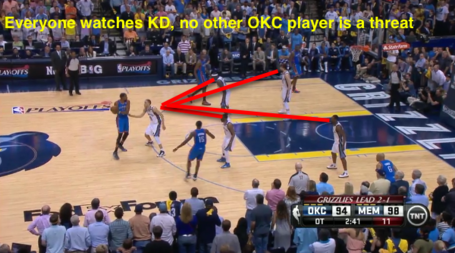 Ibaka tries to be helpful and set a screen, but that doesn't help because it allows Randolph to trap Durant. KD notices and waives Ibaka off, but it's too late. By now, Durant has nowhere to go. 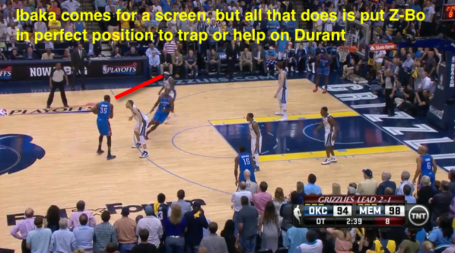 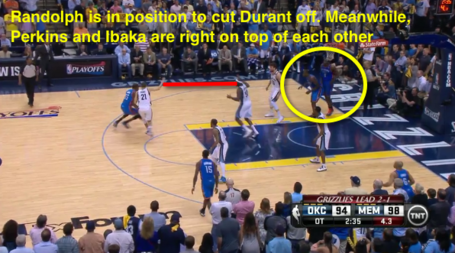 Look at that last screenshot again. While Durant tries driving, his two big men are essentially holding hands underneath the basket. It doesn't take an expert to recognize just how terrible that spacing is. 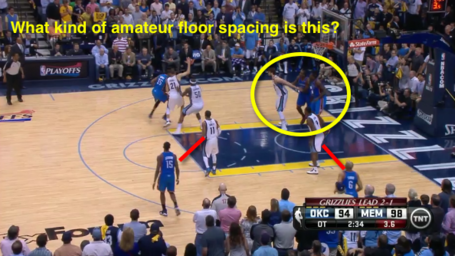 With Gasol guarding the two Thunder big men connected at the hip and the shot clock running down, this is all Durant can do. 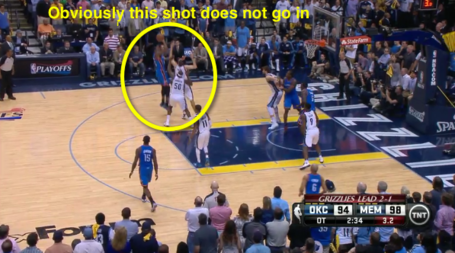 Any player will shoot 2-14 when these are the shots presented to him. That Durant was forced to take them is not an indictment on his shot selection or anything that he is directly responsible for producing. No, the reason Durant took the shots is that he had no other choices.

Credit should go to the Grizzlies' defense, but this is what happens when you have no other threats and can't space the floor properly.